Hedy Lamarr was one of the most beautiful women in the film industry and was also the first non-pornographic actress to not only appear nude but to depict a female orgasm on screen in the 1933 film Ecstasy. Born Hedwig Eva Maria Kiesler on 9 November 1914 in Vienna Austria, Lamarr got her start in the film industry working as a script girl for a studio in Austria and it was here that Czech filmmaker Gustav Machatý noticed her and arranged for her to get experience in front of the camera with a few bit parts prior to having her star in Ecstasy. Her first husband, millionaire arms manufacturer, Friedrich Mandl supposedly bought up as many copies of the film as he could to restrict public viewing. Additionally in an attempt to stifle her acting career he would drag her to business meetings and have parties in their home with attendees including Hitler and Mussolini. It was during these meetings where Ms. Lamarr (who was fascinated with science as a child) was able to listen to conversations between scientists and others involved with military technology which provided her a solid footing for the future.

Hedy Lamarr fled both the fascist governments and her controlling husband, and while traveling to the United States she landed a contract with MGM studios and officially changed her name to Hedy Lamarr, Hedy for Hedwig and Lamarr in honor of the ocean. In Hollywood MGM loaned her out to United Artists where she starred opposite Charles Boyer and became an instant celebrity and continued to star opposite the biggest names in the industry. Over time her looks faded and she appeared for the last time on film in 1958. In the 1970’s Hedy Lamarr’s name once appeared on the big screen but it was more of a punch line for Mel Brooks’ comedy Blazing Saddles, one of the lead characters was LT Governor Hedley Lamarr and when he was referred to as Hedy Lamarr, he would retort that’s Hedley. Now since Blazing Saddles was a satirical slap in the face of discrimination it is possible that Lamarr’s name was used for this reason since she was only remembered for her beauty and not her contributions to science.

Since Hedy Lamarr was not only Jewish but also from Austria she had enough reason alone to want Hitler defeated but then add her first Marriage to an arms manufacturer for Hitler she had a double motive. Lamarr had an idea to rapidly switch frequencies for both transmission and reception to prevent signal jamming or reception by any receiver other than the one the signal was intended. In 1940, at a dinner party in Hollywood, Lamarr asked George Antheil to help her design a way to synchronize signals to switch frequencies and the two of them devised a way utilizing the same concept of a player piano with 88 frequencies (one for each key on a piano keyboard) and piano rolls to synchronize the frequencies. In December of 1940, Hedy Kiesler Markey (Lamarr’s married name) and George Antheil submitted their “Secret Communication System” device to the National Inventor’s Council (NIC) and subsequently filed a patent application on June 10, 1941, with the patent granted on August 11, 1942. Lamarr and Antheil donated their patent to the U.S. Military to support the war effort. Additionally, Lamarr wanted to join the NIC to aid in the war effort but was told she could best help by using her status and looks to sell war bonds (at which she was very effective).

The patent was classified and “Frequency Hopping” was initially shelved but after WWII the United States Navy further developed it for use in sonobuoys to transmit SONAR data from the “buoy” to an aircraft. During the Cuban missile crisis, frequency hopping was utilized on a large scale for the first time to provide secure communications between the ships involved in the blockade. Further development provided secure communications for all military branches.

Secret communication system
US Patent 2292387 A

In the 1980’s frequency hopping became available for non-military use and the technology further spread, today the term for frequency hopping is “spread spectrum” and is used in all manner of communication, from Wi-Fi and Bluetooth to CDMA used in cellular technology, Long Term Evolution (LTE) wireless technology, and even GPS. Spread Spectrum allows for increased efficient utilization of the available frequencies since no single frequency is used continuously the entire bandwidth is available for use by multiple users simultaneously. Today’s  secure wireless communications are based upon the initial technology developed by the one-time “Most beautiful Woman in the World” Hedy Lamarr. 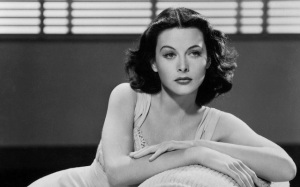